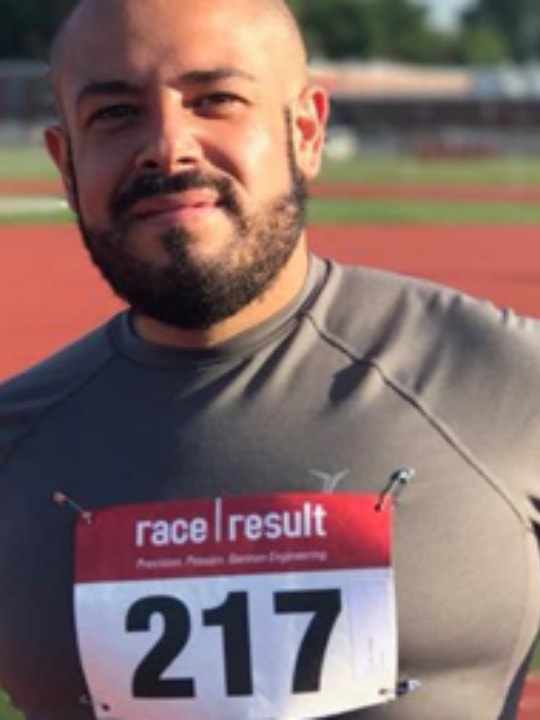 With every step toward the finish line, I was making my way toward a moment I knew would forever change my life. I began to remember where I was before bariatric surgery struggling with my weight and as I neared the end of the race, the old me —along with all those thoughts— vanished away. I ran my first 5K and I couldn’t be prouder of myself.

Obesity ran in my family and I was not immune to it. When I started to gain weight, I realized I was the same age as my father when he began to experience his own weight problems. He ended up suffering a massive heart attack and I felt I was following in his footsteps. Between working long nights and weekends with no set hours, I didn’t have a lot of time to take care of myself. It was time for me to do something about my weight.

In February 2017, I had the gastric sleeve procedure and since then I have lost 65 pounds. I feel so much better mentally and physically. It changed my mindset on how to eat. Surgery is just a tool. You still need to exercise and eat right to make the surgery work. I finally felt I had the tools to make the eating right part work. I was determined to make the exercise part work also.

My goal had always been to participate in a 5K — not only to show others what I can do but to prove to myself how far I’ve come. When I discovered the Mayor’s Day 5K Run/Walk in Union, I signed up immediately!

Training for this race was far from easy but I used an app called Burn that helped. It slowly teaches you how to run longer distances a little at a time. But the real challenge came when a few weeks after my sleeve surgery, I had a surgery in my left arm to repair nerve damage caused by a car accident. I didn’t let my arm being in a sling stop me from running. Even with my arm in a cast and in constant pain, I went to the park and got my three to four miles of walking in on a regular basis Nothing was going to stop me. As the weight started coming off I struggled less. I went from walking to running and before long I was able to run for longer stretches of time without having to stop. This feeling made me want to push myself more and more. Not only did signing up for the race give me a goal to achieve but it actually set my date to achieve it.

The day of the race I was excited but nervous. I had worked hard and put in a lot of hours training and increasing my strength; still I couldn’t help but think, “Did I train enough?” I worried that most of my training had been on a flat track. I didn’t take into account that the course will have hills. The day of the race, I started off really well and started to struggle midway through. I didn’t know if I would be able to finish the course. I fought through being out of breath and pain shooting down my legs. I had pushed myself so hard from day one of the surgery. I had some bumps along the way but it was all worth it when I crossed that finish line!

I amazed myself by completing the race in a little over 30 minutes. I came in 52 out of 177. Prior to weight loss surgery I would be out of breath simply bending over to tie my shoes. Now, here I was unlacing my sneakers after completing a three-mile run. Making it across the finish line wasn’t the end to my story. I realized with this new tool given to me, I can accomplish so much more than I originally had planned for my life. This spring, I plan to start working myself up to doing a half marathon. The race isn’t over…and this is only my beginning!